Stablecoin transfer works by moving currency conversion and cross-border remittance into the digital asset space. This allows them to benefit from a multitude of advantages baked into the blockchain technology underpinning the digital asset space, and escape a world of unnecessary fees and idelays. In the past, remittance across a national border might go something like this.

Bizco owes $1m to CompanyCorp. The remittance is made via the international banking system through tools like SWIFT, meaning Bizco tells their bank to move $1m from their account to CompanyCorp’s account at another bank in a different country where they use Euros or Yen, not US dollars.

Both banks take a cut. Whichever one handles the currency conversion takes another cut, and usually offers a conversion rate less favorable than the market rate. Both banks take a long time, up to a week and sometimes more. The process is slow and expensive.

Now, Bizco can just buy $1m worth of crypto, whether by creating their own stablecoin or utilizing an existing offering, and pay it straight to CompanyCorp’s account. They need to withdraw the dollars from their bank to make their initial purchase, and CompanyCorp needs to change it into their own country’s fiat currency at their end when they move it off the exchange. But other than that, the whole process takes place on a digital exchange that doesn’t need the say-so — or the fees — of the traditional financial world. With decentralized blockchain technology there’s no need to rely on third parties to arbitrate or guarantee transactions, meaning payments can be much more secure — and much faster.

There’s obviously good reason for companies to do transactions like this in stablecoins: they won’t lose value on the way to the payment. 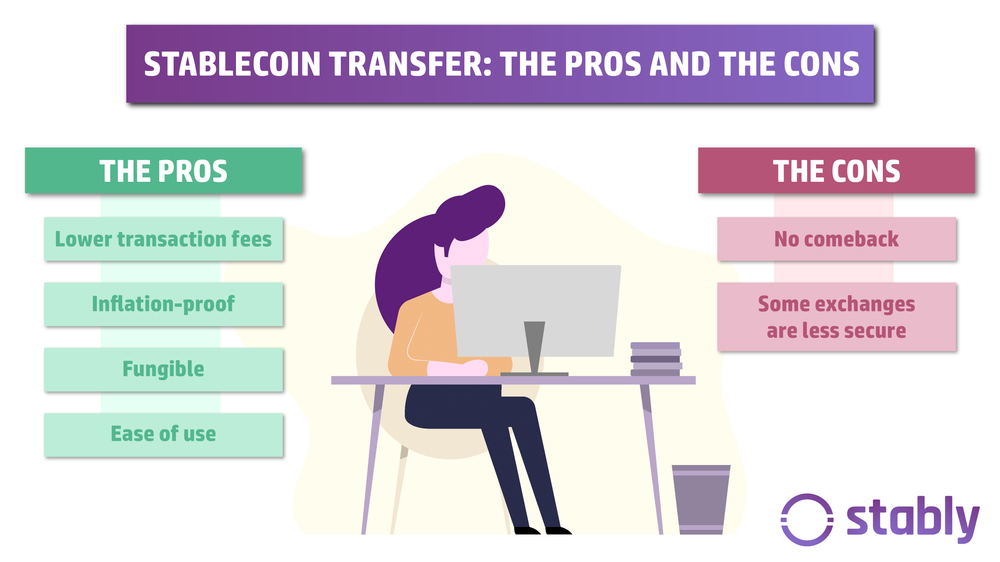 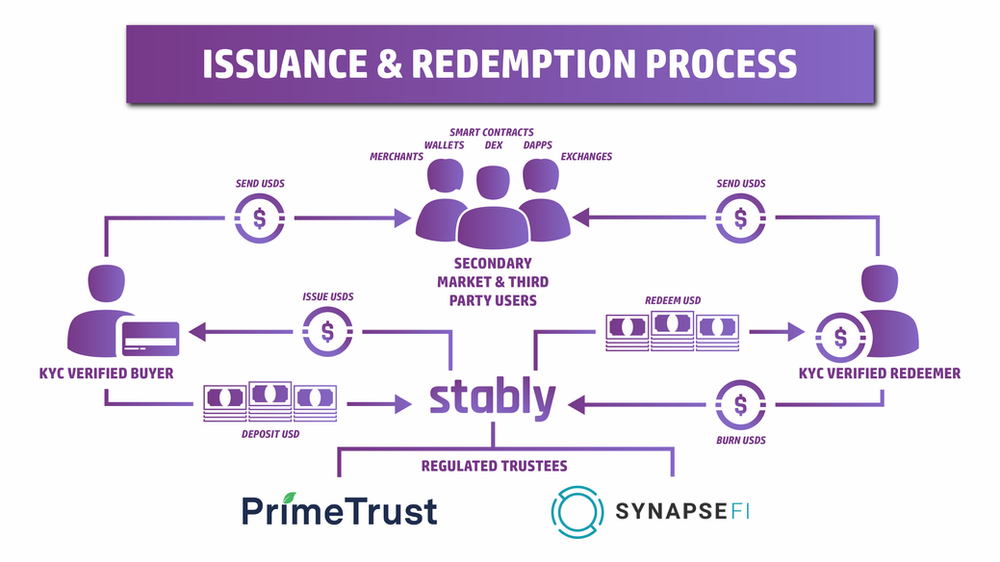 Stablecoin transfer: the pros and cons

Stablecoin transfer is susceptible to the following problems:

However, they also deliver the following decisive advantages:

Of the advantages offered by stablecoin, cost is the most clear and immediate. The option to stop spending money when you could keep it has universal appeal. But how do the real costs stack up?

Typical traditional cross-border remittance incurs fees for processing, cross-border transactions, and currency conversions, as well as waiting times of up to a week and sometimes more. In 2015, McKinsey found that:

Globally, the average remittance cost is around 7.5%. The markup for currency conversion differs between companies — with Western Union it’s around 1.5%.

Traditional remittance is a cash cow that takes a week to do a few minutes’ work and charges you 9% or more of your principal for the privilege.

By contrast, stablecoin remittance is shockingly inexpensive. On Kraken, fees vary based on volume; they top out at 0.20% of principal: over forty times cheaper than traditional remittance.

Stablecoin remittance is still in its early stages, but growing rapidly. The traditional remittance structure still accounts for the vast majority of business and consumer remittance activity despite its clear shortcomings.

Traditional crypto brought to the table instant, very low-cost transfers, but was too unstable to be attractive to businesses and despite its creators’ intentions has largely been used to store rather than to exchange value. But stablecoins offer something different: price stability inherited from their underlying asset, and the instant, low-cost transfers of a trust-less blockchain.

Stablecoin remittance is expected to grow through B2B first. Consumers will typically wait until a product is user-friendly before large numbers adopt it, and crypto exchanges are still a niche way to pay. Suspicion, ignorance and unfamiliarity with the interface will all deter the hundreds of thousands who send regular remittances to relatives and friends across borders, and they will remain loyal Western Union customers or TransferWise enthusiasts for some time to come.

Businesses, however, will move to stablecoins much faster. A greater willingness to engage with new technologies when there is clearly profit in doing so partly explains this. But businesses stand to gain far more money than consumers because the sums involved in remittance are vastly larger. Nine percent of half a million dollars is worth learning to use new tools for.

Typically, new tools like this are adopted by smaller businesses first — not ‘mom and pop’ operations, but growing SMEs (Small and Medium Enterprises) looking for an edge. Very large enterprises tend to come to the party a little later and buy facilitated enterprise solutions that service their whole organization, and we can expect to see the same pattern play out in the stablecoin remittance space.

What services should businesses be looking towards?

These assuage the biggest concerns businesses have: major losses occasioned by poor security or non-compliance.

The system they choose must offer:

These are all flagship features of our Stably Prime product, and users can issue, redeem, and transfer USDS with a Stably Prime account too!

Schedule a demo for Beta or learn more about Stably Prime here!