US regulators have greenlighted banks to custody stablecoins and their underlying assets. This builds on the process of legitimizing crypto asset custody and trading that began in September this year, and ties the digital and traditional finance spaces ever closer together.

On September 21, the Office of the Comptroller of the Currency (OCC) announced that ‘federally chartered banks and thrifts may engage in certain stablecoin activities.’ This brings welcome clarity to the regulations around stablecoin custody. After all, many stablecoin issuers and holders have been working with the mainstream banking system to custody the coins, but without any clear regulation. 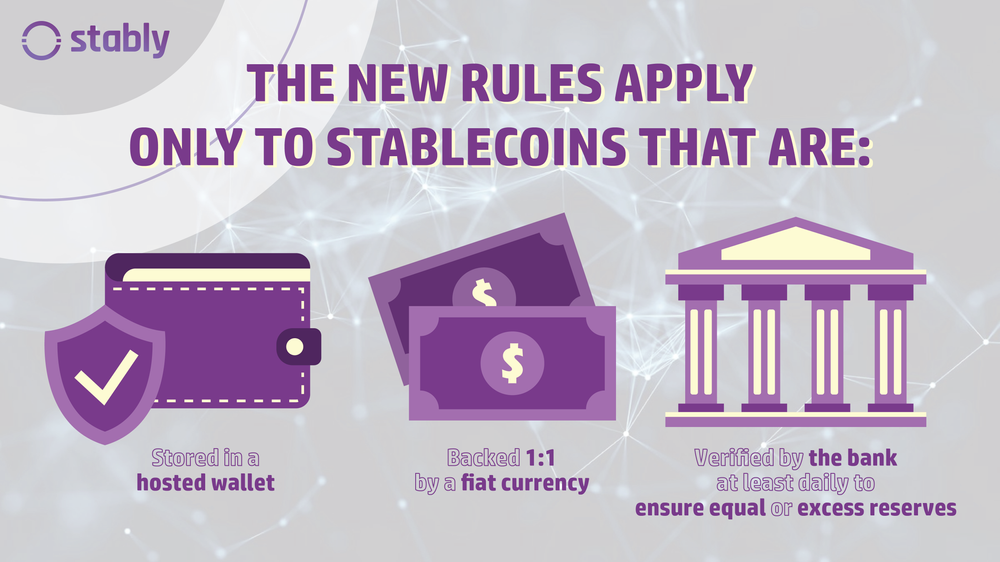 The new rules apply only to stablecoins that are:

The announcement forms part of a shift in OCC policy toward incorporating the crypto space into traditional banking.

On July 22 this year, the OCC announced by public letter that any chartered national bank can hold the cryptographic keys for a wallet or account. The move completes the evolution ‘[f]rom safe-deposit boxes to virtual vaults,’ says Acting Comptroller of the Currency Brian P. Brooks, and ‘clarifies that banks can continue satisfying their customers’ needs for safeguarding their most valuable assets, which today for tens of millions of Americans includes cryptocurrency.’

Now, in an interpretive letter dated this October and signed by Senior Deputy Comptroller Jonathan Gould, it’s made explicit that ‘a national bank may hold… stablecoin “reserves” as a service to bank customers.’

Exactly what are banks allowed to custody?

Gould’s letter is clear. It speaks to underlying assets, not coin custody, and it doesn’t address unhosted wallets. Furthermore, it addresses only those stablecoins ‘backed on a 1:1 basis by a single fiat currency,’ and where the ‘bank verifies at least daily that reserve account balances are always equal to or greater than the number of the issuer’s outstanding stablecoins.’

‘Cryptocurrencies described as “stablecoins” may be more complex, backed by commodities, cryptocurrencies, or other assets but with values that are pegged to a fiat currency or managed by algorithms. For purposes of this letter, we consider a “stablecoin” to be a unit of cryptocurrency associated with hosted wallets that is backed by a single fiat currency and redeemable by the holder of the stablecoin on a 1:1 basis for the underlying fiat currency upon submission of a redemption request to the issuer. We are only opening on those facts and circumstances at this time.’

In addition, the letter defines hosted wallets as ‘an account-based software program for storing cryptographic keys controlled by an identifiable third party’ receiving, storing and transmitting crypto transactions on behalf of account holders who typically do not have direct access to the keys themselves.

This is a narrow definition of a stablecoin — it excludes coins backed by gold, as well as asset-backed coins more generally. But it is clear and certain. US banks can custody the fiat deposits that underlie 1:1 fiat-backed stablecoins, meaning the whole process of operating a stablecoin backed by fiat can be brought inside the traditional banking system. 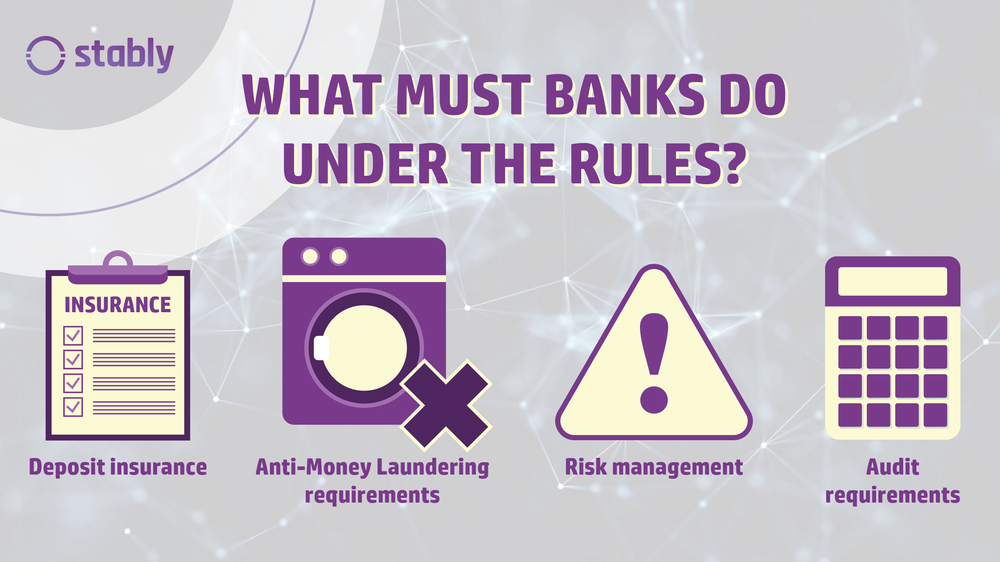 What must banks do under the rules?

The OCC’s new regulations spell out requirements for banks, though in general these simply state that existing requirements apply here too. These include:

The Securities and Exchange Commission (SEC) FinHub Staff issued a statement reminding all market participants that whether a stablecoin is a security is ‘inherently a facts and circumstances determination,’ though in practice no directly asset-backed stablecoin is a security under the current rules. Nevertheless the statement urges market participants to contact SEC FinHub Staff to ensure regulatory compliance.

What does this mean for the future of enterprise stablecoins?

A huge part of the appeal of stablecoins lies in their capacity to enact transactions across the lines of traditional state-backed fiat currencies. The ability to translate an underlying asset such as fiat currency into a highly-fungible, secure and trustless token means that transactions can be made anywhere in the world, cost nearly nothing in fees and take seconds rather than days. This stands in obvious contrast to the prices charged and delays imposed by banks in their role as trusted intermediaries and is only possible because of the cryptographic protection blockchain technology offers.

How will the new rules announced by the OCC affect this?

Initially, there will be only minor changes. Some banks will step into the space, offering custody and management of fiat-backed stablecoin accounts either directly or through subsidiaries and spin-offs. JP Morgan already has its own stablecoin, backed 1:1 with USD, for instance. However, banks will be incentivized by this change to move into the crypto space, initially in a very familiar way in which they add digitization as a kind of layer over USD transactions. (Technically the fiat deposits underlying stablecoins need not be USD, but in most cases they will be.) This will create a larger market for stablecoins and encourage integration between the banking system and coin issuers and users.

It’s about direction, not destination

For stablecoins whose underlying asset isn’t a fiat currency, there’s little direct relevance. That absolutely doesn’t mean the announcement isn’t interesting. Far from it. But it’s interesting for its direction, not its destination.

Permitting banks to tokenize USD and custody the underlying fiat funds as well as the tokens is a step in the right direction, because banks and other institutions should be able to do that and there should be sensible regulation to support them as they do.

But what’s much more interesting is that US regulators are opening the doors to digital assets while seeking to meet the challenge of their increasing use with appropriate legislation. They’re moving beyond applying the existing rules, like when the SEC established its authority over security tokens.

And they’re signaling to the space that stablecoin activity is legitimate in regulators’ eyes, and will be offered the same sort of protection as other reserve accounts. That’s hugely significant.

We can expect future regulatory announcements to address the areas that have so far not been considered by the OCC: unhosted accounts and asset-backed coins. There will be considerable agency overlap in the area of digitized asset-backed securities — a matter for the SEC — but digital currencies backed by static assets, particularly gold, are likely to wind up entirely under the purview of the OCC.

The outlook for gold-backed stablecoins is therefore excellent, and we can expect to see more enterprises moving into stablecoins in two main ways. First, there will be a boom in bespoke stablecoins, and second, a boom in usage of existing stablecoins. In fact, this boom is already underway. Behind the constant headlining about BTC’s rise and fall is an explosive increase in total stablecoin market cap, which took five years to reach six billion — and just four months to grow from $6 billion to $12 billion following a sharp drop in conventional crypto prices; more recently, it grew from $10 billion to $18 billion in the last four months.

Institutional interest in investment may focus on the strongest-performing crypto assets (BTC, and to a lesser extent ETH, particularly in the DeFi space). But for transactions and deposits, stablecoins are increasingly attractive to enterprises, and this trend is likely to accelerate, particularly when regulations expand to encompass coins backed by an asset more stable even than the US dollar: gold.

The ecosystem to support such coins already exists. It’s easy to see why US regulators chose to focus on the narrowest definition of stablecoins first, and the remaining uncertainty about exactly how many stablecoins will be classified as asset-backed securities probably accounts for some of the delay in widening the scope of the new regulations. But between coins backed by buildings and businesses, and those that merely tokenize fiat currencies, lie coins like GLD that do for gold what dollars once did: render it fungible while keeping it secure.

Are you or your business looking to get started with crypto custody? Want to tokenize your own assets? Explore options with us and become a partner! www.stably.io