The Future of Branded Stablecoins After Libra, will there be stablecoins from other major brands with a large customer network like Amazon, Delta or T-Mobile?

Stablecoins of the Future

The coming years will see the advent of a second generation of stablecoins. These “branded” stablecoins would not only employ the fundamental aspects of price stability and blockchain technology used by today’s stablecoins, but also include loyalty program integration, secondary-market liquidity, and branding opportunities. Companies adopting their own branded stablecoins could benefit from lower transaction costs, stable interest income from a fiat reserve, and a more streamlined loyalty program. Furthermore, with stablecoins becoming a viable competitor in the multi-billion or multi-trillion-dollar markets of remittance, retail payments, and cross-border transactions, the stablecoin industry itself could become a trillion-dollar industry within the next decade.

How Businesses Can Benefit From Stablecoins

Credit card processing fees across major credit card companies such as Visa, MasterCard, and AmEx average about 2% per transaction. Because of this, many smaller businesses charge customers more for credit card purchases, prohibit the use of certain cards with higher fees, or even take cash only. For businesses with large user bases like Walmart, which in 2018 had 275 million visiting customers per week, these processing fees add up to a lot of lost revenue: with $514 billion of net sales in the 2019 fiscal year, processing fees averaging 2% will cost Walmart cost over $10 billion annually.

However, these high costs of transaction can be circumvented through the use of stablecoins, providing value for both businesses and customers. Customers will no longer have to be charged extra fees by businesses for paying with their credit card or be forced to pay with cash. And on the flipside, businesses will be able to save on processing fees and no longer need to go through the complicated effort of optimizing their transaction costs with a myriad of payment companies and services. Because stablecoins are based on blockchain technology, transactions using stablecoins are immutable by nature, meaning there is no chargeback risk for the merchant. The second generation of stablecoins will likely be developed in the next few years, having the Gen 1 fundamentals of stablecoins but with further advantages. These Gen 2 stablecoins will have features built-in such as privacy, rewards, interest, credit, and so on. They will fully make use of the fact that stablecoins are a programmable currency, and thus can be added to with utilities relevant to their various use cases, including payment, remittance, and stores of value.

Why Gen 2 Stablecoins Will Dominate the Future Economy

The ability of cryptocurrencies to be an anonymous, borderless store of value has proven itself to be a real-world necessity for millions. In Venezuela, people cannot flee the country with their fiat money: they cannot send it internationally through their banks and they cannot physically carry their money with them, as it would be seized from them at the border.

As such, Venezuelans have turned to Bitcoin. From 2014 to 2016, the number of Venezuelan Bitcoin users rose from 450 to over 85,000. However, while Bitcoin may be a good store of value compared to the Venezuelan bolívar, Bitcoin is still extremely volatile, and when families put their life savings into it to leave the country, Bitcoin’s volatility can cause them to lose a lot. As more people learn about and adopt Bitcoin in Venezuela, more people will discover stablecoins and take advantage of the aptitude they have as a store of value. It is only a matter of time before stablecoin adoption comes, and adoption in Venezuela could be the catalyst for more and more people hearing about and using stablecoins. As the stablecoin market grows, so too will stablecoin technology. Gen 2 stablecoins with pertinent features will start being developed en masse. From there, it will take only a few companies to integrate stablecoin payment for many others to join them; blockchain technology has a connotation of risk, but there are many empirical benefits to stablecoins integration, and once the first few companies succeed, many others will follow.

The Future of the Stablecoin Industry

The story of cryptocurrencies is one of astronomical growth, with cryptocurrency being the best-performing asset class in numerous recent years. In just over ten years, cryptocurrency has developed into an industry with over $100 billion in market capitalization, and with the current pace of technological innovation, the crypto industry is only set to grow further. Stablecoins will expand within this growing cryptocurrency market, but they will also capture market share from the remittance and payment industries.

According to the World Bank, global remittance inflow in 2018 amounted to an estimated $700 billion dollars. Most migrant workers in Asia send home approximately $200 monthly, but they must pay $12 in international transfer fees–half a day’s wages gone. There are already an array of blockchain solutions being developed to address the remittance issue, but in coming years, stablecoins will become the winning solution because of low transaction costs and price stability across any period of time. Once the dissemination of stablecoin technology inevitably occurs, stablecoins could become a dominant player in the $600 billion remittance industry. 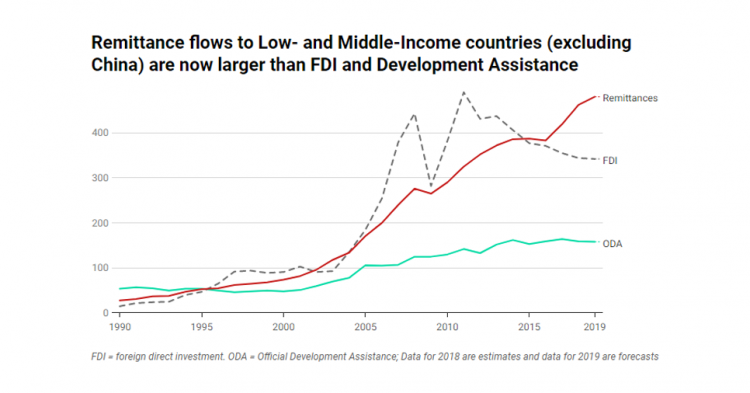 Global remittance volume is on the rise

Within the next ten years, stablecoins could also enter the $100 trillion payments industry because of their use in retail payments and cross-border payments. Within the retail space, many company’s loyalty programs are failing, and since 2002 companies that focused more on loyalty programs grew in revenue at a rate 20% slower than companies that focused less on loyalty. Companies with failing loyalty programs need innovation and reliable methods of collecting data through their loyalty programs, both of which are problems that loyalty-integrated stablecoins help with. Retail payments are a $25 trillion dollar sector of the overall payment industry, and Gen 2 stablecoins with retail-relevant features could conceivably gain a large portion of market share due to the features discussed in the first section. One of the biggest limiting factors today for cryptocurrency to expand in the $25 trillion cross-border payments industry is not the technology, but rather a lack of awareness, a stigma of volatility surrounding cryptocurrencies and entrenched special interest groups. Stablecoins, though, are inherently risk-free and stable, so it would be easier for risk-averse banks to adopt stablecoins as potential cross-border payment solutions. In total, the market for remittance, retail, and cross-border payments is more than $50 trillion, and given that it is likely that in the next ten years stablecoins could take market share from existing financial institutions within these industries, 2030 could very well see a multi-trillion dollar stablecoin industry.

Today, the stablecoin industry is stillsmall relative to the cryptocurrency space as a whole, and the industry is dominated by Tether, which has ten times the market capitalization of the next biggest stablecoin, USDC. However, as the stablecoin market matures, market capitalization will become more evenly distributed among stablecoins. There were 193 stablecoin projects announced in 2018, compared to 81 total projects announced in years before. With more players entering the stablecoin market and greater technological innovation, Tether will inevitably give up much of its market share to its competitors, especially with its decline in reputability over the years. In April 2019, the office of the New York Attorney General alleged that iFinex, Tether’s parent company, had misused $900 million of Tether’s cash reserves to hide an $850 million loss. Days later, Tether revealed that it is only 74% backed by cash and securities, falsifying its previous claims that USDT is backed 1:1 by fiat. Trust in Tether will continue to erode, leaving space for coins that offer more transparency to overtake it. In the future, there could be hundreds of stablecoins, each serving the needs of specific markets, such as how today there are hundreds of banks and payment companies that cater to different needs and geographical areas.

Stably is a venture-capital backed startup. Our vision for the future is to build an alternative digital bank powered by stablecoins — faster, cheaper, transparent and globally accessible.

USDS is a stablecoin created by Stably and issued by Prime Trust, a Nevada-chartered trust company that is also the regulated administrator for USDS. Stablecoins are cryptocurrencies that are equivalent to national currencies — i.e. digital cash. Regulated, fiat-backed stablecoins are backed by physical reserves of cash and can be redeemed at a 1:1 ratio.

USDS virtually eliminates the crippling price volatility of traditional cryptocurrencies like Bitcoin and Ethereum, while still retaining many of their useful characteristics.